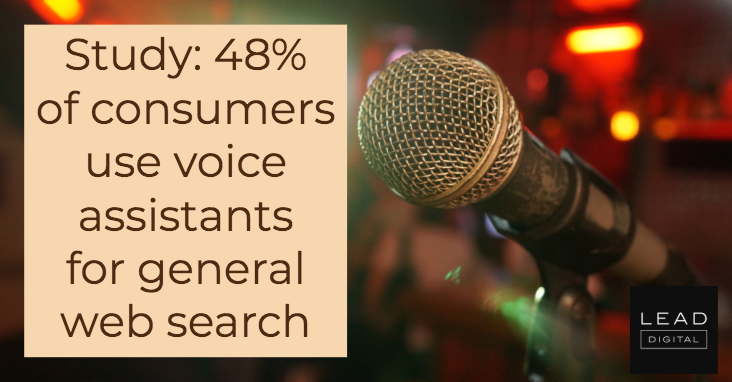 Despite concerns about accuracy and privacy, the Adobe survey presents a mostly positive outlook for voice and virtual assistants.

The now-debunked prediction that 50% of all searches will be conducted by voice in 2020 still occasionally appears in presentations and articles. However a new voice technology survey from Adobe finds that 48% of consumers are using voice for “general web searches.” This is not the same as “50% of all searches,” but it indicates growing penetration for voice as a search interface.

Majority of activity on smartphones. Adobe’s survey of roughly 1,000 U.S. adults, like many voice-related surveys, doesn’t carefully distinguish between smartphone and smart speaker use cases. However it does make clear that most of the activities identified in the study are happening on smartphones: 85% of respondents said they had used voice technology on their smartphones, while 39% said so for smart speakers.

In terms of usage frequency, 44% of respondents said they use voice technology in some form daily.

That satisfaction was tempered by complaints about accuracy and comprehension. Respondents said that voice recognition technology accurately responds to a question or command only 69% of the time. This is a perception from survey respondents rather than a systematic test of objective accuracy. Indeed, accuracy and/or lack of comprehension were the top complaints among users. – Read more