SEM vs. SEO vs. PPC Defined: What’s the Difference? 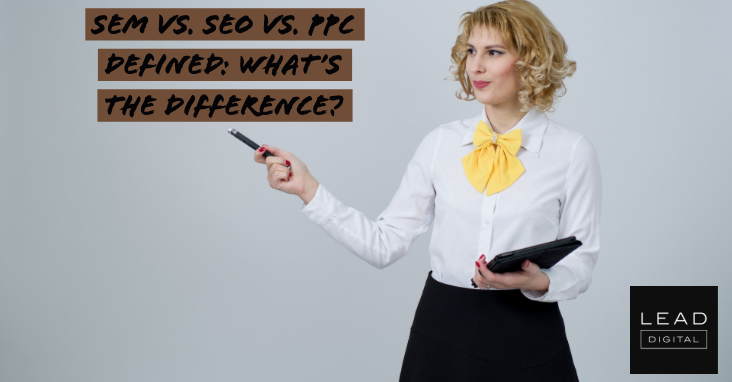 As someone who likes to think he is organized – or, as someone who at least likes to organize things – I’ve attempted to treat digital marketing terms similarly.

The same can be said for now-Googler and search industry pioneer Danny Sullivan when he began routinely using the term “search engine marketing” in 2001 to describe the overarching niche within the digital marketing industry that focuses on search engines.

As my thinking went (and as Sullivan admits he intended), search engine marketing, or SEM, would be (and once was) a useful way to summarize and classify both the paid and non-paid initiatives that go into digital marketing via search engines.

That would mean both the pay-per-click advertisements, or PPC ads, and the organic search initiatives commonly referred to as search engine optimization, or SEO, would fall under that SEM blanket term.

SEM would be the category of marketing through search engines. The paid (PPC) and non-paid (SEO) channels of SEM would both fall under it in terms of hierarchy.

And, even when you consider the literal terminology in coordination with this idea of SEO and PPC falling under that SEM blanket, it almost makes sense.

But, much like the English language, pop culture, and the Cleveland Browns, it simply can’t work the way it’s supposed to.

There will always be exceptions to the rule (like the aforementioned conundrums above).

So, confusing it may be. But the search industry shapes itself, and it has not agreed with Mr. Sullivan over the years, adopting the term SEM to fit strictly into the paid search sphere.

It surely appears it’s there to stay, too.

That is, pay-per-click advertising (PPC) is the same as search engine marketing (SEM), or at least a vital part of it.

SEO is none of those things.

What likely evolved over time due to the multiple potentially confusing digital marketing acronyms, as well as the need to define specific paid initiatives outside of Google paid search, brought two heavily used cost-driven marketing terms to mean the same thing (leading to even more potential confusion from newbies).

I’ve always tried to make sense of the literal meaning of things, too, especially acronyms.

But from there, it’s easy to get even more lost in the idea.

While the breakdown of the abbreviation PPC is spot on — regardless if it’s called PPC, CPC, paid search, search ads – we know it is referring to paid search marketing, typically through search engines like Google and Bing.

Other terms and tactics used in digital marketing initiatives – especially those tied to search marketing tactics (both paid and organic) – may not be so simple and clearly defined, though. – Read more

Read More »
April 16, 2022
PrevPrevious5 Last Minute Conversion Tips Before the Holiday Season
Next10 Important PPC Trends to Watch in 2020Next