OK Google, Why Are You Letting My Competitors Use My Brand’s Name In AdWords? 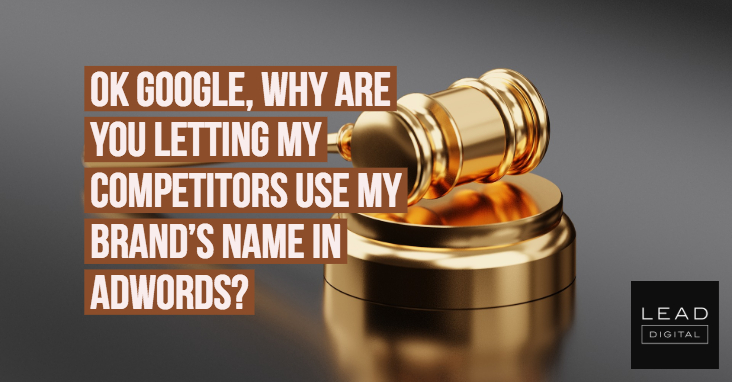 Businesses aren’t happy with competitors using their trademarks in Google search ads, even though these cases aren’t deemed by Google as an infringement of the rules, with some exceptions.

We reached out to Google to understand their stance on such occurrences and what businesses on the receiving end can do to protect themselves.

From the outset, advertising on Google’s search platform is a pretty straightforward process. You set an amount as a bid for a keyword, and whenever someone searches said keyword or a combination of keywords, your listing appears somewhere near the top of the pile—dependent on how relevant and how good your formatting is, and then you get charged whenever someone clicks through on it.

As of 2017, Google owns at least a whopping 86% share of the world’s search market. For businesses, to ignore putting their brand on Google ads is huge missed opportunity.

But as expected with such a far-reaching platform, there have been incidents where businesses have seen fit to leverage upon competitors with better brand visibility and use their identifiable names/trademarks in their ad listings on Google.

Obviously and unsurprisingly, there have already been lawsuits filed over such incidences, and judging by how often they occur, it’s apparent that such cases are a common enough occurrence to warrant a look for a solution.

So wanting to understand how business owners can help themselves in such situations, we reached out to Google for a quick clarification on their policies on third-party trademarks in search advertising, and here’s what they had to tell us.

1. You can’t stop competitors from using your trademarks in anything except the ad texts.

To start, Google pointed us in the direction of their Trademarks information page and we quickly learned that it was pretty much fair game when it came to advertising with competitor-owned trademarks on the world’s largest search engine.

In short, Google detailed that it was fine for businesses to use third-party trademarks in things like their URLs and as keywords, so long as they didn’t appear in the texts and copies themselves.

This means that using a competitor’s name in the URL is okay, and so is bidding on their name as a keyword—there’s only a problem if it appears on any other part of the ad, such as the description or the title.

Relating to the example above, this means that 99.co has grounds to call out SRX.com.sg on a trademark infringement as they’re using ’99co’ in the title of the ad, which isn’t permitted (this is providing that 99.co themselves have already trademarked the word ’99co’ prior to this incident).

On this, the team at Google explained their reasons, saying that it was all in the effort of creating a more competitive market for the benefit of the consumer.

“In terms of keywords, for many years we’ve operated a policy that doesn’t restrict advertisers from bidding against trademark keywords,” a representative from Google said. “Our trademark policy is designed to provide greater choice to users via Google ads.”

“This is similar to the way a shopper benefits when they see a variety of brands’ products on a store shelf.”

2. The best way to protect yourself is to be the better ad.

Google also went on to explain that despite there being ways for a competitor to leverage on trademarks and bidding for their keywords or putting them in the URLs, a business could still come out on top by making sure their own ad result is more relevant than others.

Because of how Google ranks ads, bidding higher for a competitor’s trademarked keyword or using a competitor’s name in the URL, for example, doesn’t guarantee that an ad result appears higher.

Instead, Google takes into account a number of other factors—clickthrough rate, ad quality, and consumer impact—to see whether an ad appears higher on a search than another one will.

This video below explains how Google ranks ads, and shows that paying more doesn’t always mean you appear higher on the list.

So what does this mean for the trademark owner? Google thinks that you should advertise better—make your ads more relevant, provide better formatting, and make sure your landing page outdoes your competitor.

3. But you can still make a complaint.

But despite their all-is-fair attitude to search marketing, Google says that they still take things seriously when it comes to outright trademark infringements.

And if so happens you find a competitor utilising your trademark in a way that directly affects your business by misleading users or putting your business in a bad light, for example, Google wants you to know that it’s still interested in protecting you against such incidences (and also protect themselves from bad press).

Obviously, Google encourages all disputes of this nature to be settled amicably among businesses and their competitors, but should it come time for a formal complaint, here’s what Google recommends you do: