Fact-checking six more rumours about how search is changing 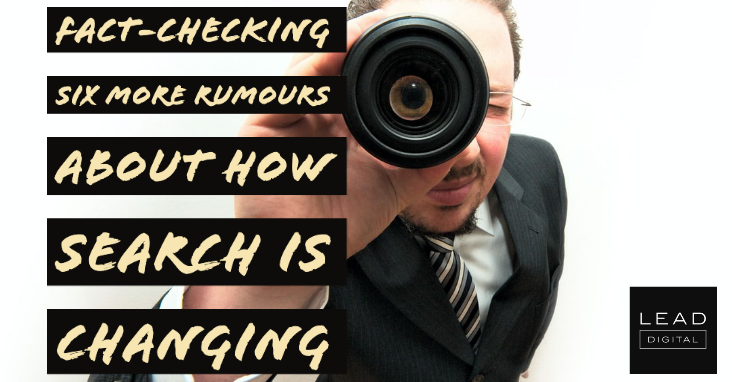 Separating fact from fiction in SEO can be really difficult.

In a previous post, I looked at the validity of five popular rumours from across the search industry. In this follow-up, I focus on analysing the real impact of another six similar claims that are regularly doing the rounds.

Desktop is no longer the single source of truth for Google indexing. Demonstrating this, I saw an example where a company’s desktop search results showed the same ‘jump marks’ (links to subheads within content) as on mobile search. The trouble was, there was nothing associated with these subheads on the desktop version of their site, perplexing the company (and myself). So, in this case, Google was indexing the client’s mobile site – including the links that were present – and showing it on desktop too.

You, therefore, need to act accordingly. Most SEO teams still run tests on desktops; but if Google is crawling your mobile version, you need to run everything – all your tests and all your health checks – on mobile too, preferably on a real smartphone to get the full experience.

There are also significant differences in the numbers of hyperlinks between mobile and desktop. A study from Moz crawled 20,000 homepages and checked if home page links were the same between the two. Thirteen percent were different and – when crawling in more depth – 63% of external links turned out to only exist on desktop. This means you might have created a lot of desktop backlinks that don’t exist or help your rankings on mobile. Again, check and act accordingly.

It is easy to draw the wrong conclusions when analysing SEO best practices. Take the average length of articles. At Searchmetrics we looked at the word count for articles that ranked in the top 10 for Google results. The average across a range of different topics and keywords was 1,692 words. Does that make writing nearly 1,700 words best practice?

Dig into the data and the answer is clearly “no”. If you split it by industry it varies greatly – from 700 words for camping up to 2,500 for financial planning.

The same point applies to all ranking factors – there are some industries or searches where a factor has a high correlation with search position and others where it doesn’t. For example, when I search for “buy trainers” online, seeing lots of small images is probably good as it helps me make a choice faster. However, if I search for “buy Air Force One Black size 6” it makes more sense to show a couple of large pictures as my intent is clearer. Google understands this, meaning that different factors will be important depending on the intent of the search.

Bidirectional Encoder Representations from Transformers, or BERT to its friends, is Google’s Natural Language Processing algorithm that was rolled out in September 2019.

I’ve heard so many rumours about BERT – the worst ones being that it is related to schema and that URLs get a BERT score, which influences how they rank. Both are simply untrue. If you check on third-party tools, you’ll see little SERP fluctuation in the week BERT was announced. Actually, you will not even find agreement among SEOs on the exact date that BERT was – supposedly – rolled out.

The reason for this is that BERT’s actual focus is on recognising words and looking at their relationships and using that to understand the searcher’s intent more accurately. Take a search for “train from Leeds to Liverpool.” In the past, if you had the phrase “fly from Paris to London and then take a train to Liverpool with no stop in Leeds” on your website, you could have ranked for the search – because you had all the individual words present. Now BERT recognises that there is a relationship between the individual words.

So, the only rankings you would lose because of BERT are those where you didn’t really fulfil the search intent. Yes, BERT is a big change for Google in terms of how it processes queries and language but not a huge update in terms of ranking. – Read more