10 reasons why your business website should be mobile optimised 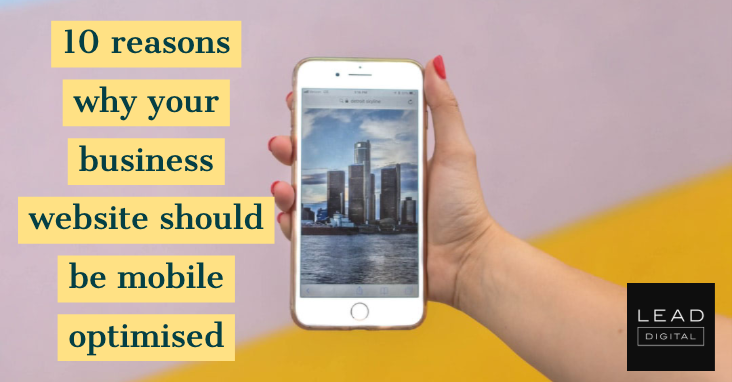 Here is a universal truth which you know – The sun rises in the east and sets in the west.

Now here are two more (almost) universal truths of the 21st century. Mobiles are here to stay. Any and every business that wants to stay relevant has to think about going mobile. Not surprised huh? Nothing new I guess except that you are yet to optimize your site for the web. But why, you ask. Give me some good reasons you say except for the fact that a responsive site makes browsing simpler.

Here we are to tell you and give you not one but ten reasons as to why mobile-optimisation is a must for your business if you want to see it grow in the 21st century.

According to study by Statistica, the number of mobile phone users across the globe is expected to reach 5.07 billion by the end of 2019. More than 80% of all internet users use a smartphone.

The bottom-line is that these statistics are only going to go up in the future towards mobile users. It’s high time for you to be thinking about going mobile.

It might be news for you but since the advent of Responsive Web Design which means that a website changes its display to according to size of the device it is being opened on, people have gotten used to the experience of getting the same features and design as they were used to getting on a desktop or a laptop.

Apart from the benefit from your prospective customers, there is a benefit for you the owner too. You don’t need to design different websites for different platforms which used to create a hole in your pocket. Responsive design means one website for all kinds of platforms and devices.

According to various studies, mobile users spend more than their desktop brethren, especially if you have a business as an ecommerce destination. According to an OFCOM study of 2017, Amazon shoppers access the Amazon app for around 74 times in a day. This should be a good indicator about the purchase potential that awaits business owners such as you.

Google came out with Mobile first index in 2017 which means that google gives first preference to websites that have a mobile optimized version of their desktop version. This update also meant that websites that have failed to meet its standards for mobile responsiveness have suffered in terms of lower SERP rankings. Any sensible business owner with an online business will know that there is no point in ignoring Google.

It is no secret that social media is an integral part of everyone’s lives today.  So much so that 91 % of mobile internet access is used for social activities according to a report by Microsoft.

Any business that is using social media or spending pounds on online advertising stands a much better chance of getting traction from potential customers via mobile.

Not having a responsive website can drive all your content marketing and paid advertising efforts down the drain. If you want to connect with the social audience, a website needs to be designed that count their social CTRs.

6. Carve out your own identity with mobile

According to a recent survey, only 56% of small business websites are responsive. Apart from this, another huge group who have actually implemented responsive design have done a poor job doing it.  This means that there is a great opportunity for you to distinguish yourself from competition. There is a lot of money lying on the table and it could be yours. – Read more

Read More »
April 16, 2022
PrevPreviousThe big comings and goings in paid search 2019 that will shape how we market in 2020
Next3 Qualities of the Best SEO InformationNext